Was part of the team producing Inside Culture on RTÉ Radio1 during its 2016 season. I’ve also appeared as a guest on RTÉ, Today FM, Newstalk and local radio.

Part of the team producing Inside Culture on RTÉ Radio 1. This is an independent production about creativity, culture and a world of Ideas presented by Fionn Davenport and produced by Zoë Comyns. The other member of the production team was Regan Hutchins. My tasks included editing, interviewing guests, package production, and research.

Compiled two inserts for this episode, each examining a piece of art from the book, Modern Ireland in 100 Artworks: Conducted research, found suitable guests, organised and conducted interviews, wrote briefs and the voice over, recorded voice over on Zoom H6 recorder, edited and produced the three-minute inserts.

We also examine a number of artworks featured in the book, including: 1955: Linda King, lecturer in Design from IADT, describes the artwork from this year, Aer Lingus Summer timetable by Guus Melai. Listen below (at 20:20); 1981: The Troubles in Northern Ireland are explored in Clifford Rainey’s sculpture, Belfast after Pollaiuolo. Maria Delaney talks to Paula Murphy from University College Dublin about the significance of this work. Listen below (at 42:16):

My package on this episode was about Irish silversmiths, past and present: Conducted research, found suitable guests, organised and conducted interviews / background sound recording, incorporated recording by another producer, wrote briefs and the voice over, recorded voice over in studio, edited and produced the eight-minute package.

Maria Delaney explores the work of Irish silversmiths, spanning the centuries from 18th century Dublin to the present day. She discusses the life of master silversmith Thomas Bolton, later Lord Mayor of Dublin, joins makers Stuart Cairns and Cara Murphy as they exhibit their work in London’s V&A museum and she visits the National College of Art and Design in Dublin where ‘Metalwork’ students, Aisling McLoughlin and AnneMarie Reinhold are preparing for their final year showcase. Listen here (at 23:20):

The package on this episode was on the topic of music perception which nicely incorporated my science background: Conducted research, found suitable guests, organised and conducted interviews / concert recording, wrote briefs and the voice over, edited and produced the ten-minute package.

We explore the music room in our brain by chatting to Kevin Mitchell, professor of neurogenetics in Trinity College Dublin. We also hear from Dr Sam Norman Haignere, who is looking into this very subject in Massachusetts Institute of Technology (MIT) in Boston. Finally, professional pianist Svetlana Rudenko who has synaesthesia gives us a glimpse of what it is like to perceive music differently. Listen here (at 33:50):

My package on this episode was about maker culture in Dublin: Conducted research, found suitable guests, organised and conducted interviews and vox pops, wrote briefs and the voice over, recorded background sounds, edited and produced the thirteen-minute package.

Earlier in the summer the Dublin Maker event attracted 10,000 people sharing ideas on 21st century approaches to arts and crafts. We are joined by Emer O’Daly, CEO and co-founder of Love and Robots, a company that is using cutting-edge technologies to create made-to-order bespoke pieces of jewellery. We visit a business that uses computer design and 3D printing – Props Factory. They make props, models and puppets for film, events and theatre. David Flynn and Christine Harold shows us their workshop near the Point in Dublin. And Inside Culture visited the TOG Hackerspace near St Patrick’s Cathedral in Dublin – a communal space for people to purchase and use facilities. Listen here (at 24:30): 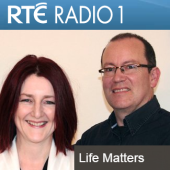 Part of the small team for the independently-produced RTÉ Radio 1 ethics programme, Life Matters. Produced by Colette Kinsella, who presented the programme with Seán Duke. The 13 shows aired from February to May 2015 on Sundays at 7.30pm. I was involved in 11 out of 13 of these episodes with a mix of research and production support including interviewing guests. Life Matters was shortlisted for a PPI Radio Award 2015 in the Specialist Speech Programme category.

Human population on the Earth has been accelerating for the past 200 years. There is now over seven billion people living on the planet. Colette and Seán ask: How many more people can the Earth support? Do we need to stop having babies or is there another way to save the planet?

New podcast examining science in Ireland. The first episode tells the story of how a PhD student, Rebecca O’Neill, became interested in Wikipedia and digital curation with a twist of tiger and natural history. It also checks out upcoming events as well as speaking to key influencers about the future of science funding in Ireland. Produced and researched by Maria Delaney who presented the programme with David Delaney.

Reporter Maria Delaney was at this week’s  ESOF meeting and sat down with Nobel Laureate Brian Schmidt who helped find evidence of an accelerating and expanding universe.

Worked as a broadcast assistant on the Newstalk documentary: Busáras – The Nations Bus Stop. This was produced by Zoe Comyns and aired on 25th December 2013 and repeated on 27th December 2013.

bring on the women…

.
Invited as one of 25 expert women to attend the first ‘Bring on the Women‘ training day. The event was organised by RTÉ and Women on Air.  Press coverage of this new initiative was featured in the Irish Times and the Irish Independent.

I have also completed the Broadly Speaking Panellist Bootcamp. This is a one-day course given by RTÉ’s Audrey Carville.