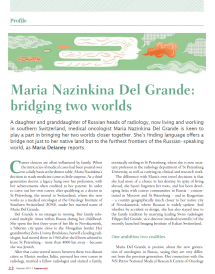 Issue #87, Autumn 2019: Maria Nazinkina Del Grande: bridging two worlds – A daughter and granddaughter of Russian heads of radiology, now living and working in southern Switzerland, medical oncologist Maria Nazinkina Del Grande is keen to play a part in bringing her two worlds closer together. She’s finding language offers a bridge not just to her native land but to the furthest frontiers of the Russian-speaking world.

Published in autumn print edition of the Cancer World magazine (and online).

Issue #77, March-April 2017: Improving pharmacovigilance through direct patient reporting – With increasing numbers of cancer drugs being approved on shorter trials that involve fewer patients, getting accurate reports of adverse events and side effects after approval is increasingly important. Efforts are underway to encourage us all to be alert for – and report – possible side effects from the medications we take.

Published in March/April print edition of the Cancer World magazine (and online).

Issue #72, May-June 2016: Doctors and nurses: We work as a team – why not train as a team? Patients get better care when doctors and nurses communicate well and each profession understands and respects what the other contributes. So shouldn’t their training prepare them for teamwork? In this article, medical training is examined, with a focus on interprofessional education, where two or more professions learn with and from each other.

Published in May/June print edition of the Cancer World magazine (and online).

Issue #71, March-April 2016: Is this the end for the microscope? It’s an iconic symbol of the pathologist’s profession, but can the microscope compete with new generations of precision digital scanners? The opinion from labs that have made the switch is probably not.

Published in March/April print edition of the Cancer World magazine (and online). 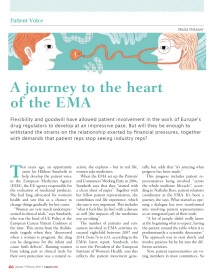 Issue #70, January-February 2016: A journey to the heart of the EMA – Flexibility and goodwill have allowed patient involvement in the work of Europe’s drug regulators to develop at an impressive pace. But will they be enough to
withstand the strains on the relationship exerted by financial pressures, together with demands that patient reps stop seeing industry reps?

Vol 296, No 7888, April 2016: Treating Lyme disease: when will science catch up? Cases of Lyme disease appear to be rising but there are still many unanswered questions about the condition, its diagnosis and the available treatment options.

This article is also available online. 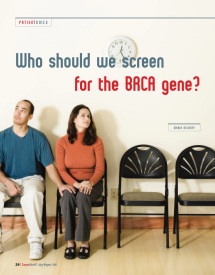 Issue #67, July-August 2015: Who should we screen for the BRCA gene? Most people carrying harmful BRCA mutations only find out after they are diagnosed with cancer, and often not even then. Population screening is costly and the results can be hard to interpret. But should we do it anyway?

Published in the summer edition of Cancer World magazine (and online). An edition of the piece was published first by ArsTechnica. This was funded by a journalism grant from Cancer World, an initiative of the European School of Oncology.

Issue #52, Summer 2014: Telling Stories that Matter Essay: A doctor’s dilemma – A paediatric resident struggles with the ethics of returning genetic results to a pregnant patient by Joon-Ho Yu & Maria Delaney

Published in Creative Nonfiction magazine as well as online through ‘Think Write Publish’. This is the finished product of work done through a ‘Next Gen Communicator’ science policy fellowship supported by Arizona State University and the US National Science Foundation. Read on thinkwritepublish.org